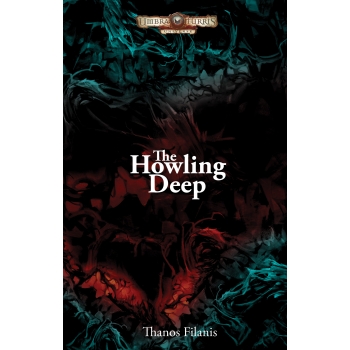 Ask for product Tell a friend PDF Specification
A grim and claustrophobic story about the Gnomish mining ship lost in the darkness... We are giving you a story The Howling Deep by a young writer Thanos Filanis.

After you make a purchase and the payment is confirmed by our website, you will receive an email with an order status update. Enter that email, click Order details and then click Link to the purchased files to download the .epub file.

In my time amongst the Gnomes, I have experienced many wonders. Seeing the Crystalline Waterfalls, where the water assumes different colours depending on the types of jewels it runs over, brought a joyful smile to my face. Tasting the luminescent mushrooms of the underlands, which give a slight ambience to the skin, awakened in me a childlike amazement which I had not experienced in years. And, of course, merely living in the metropolis of Gnometrion, this miracle of engineering, is a gift that never stops giving, for its streets always hide new surprises at every corner. It would not be an overstatement to say that my years representing our nation in the lands of the Gnomes have changed me into a different man than the one who left Umbra Turris; one able to appreciate the small and the wondrous, and to look at things with new-found fascination.
And yet, despite all that, and even after all these years, I find myself unable to feel truly comfortable in this underground realm. It is simply impossible for me to get over this overwhelming sense of crushing pressure at the thought of the innumerable tons of rock that stand right above my head, cutting me off from the surface world.
The Gnomes themselves are completely unaffected by this. Their perception is not that of a world divided into surface and underground, but rather of one split off into two very different categories: the known world, claimed by the pacifying powers of civilisation, regulated by technology and etiquette; and the untamed world, where all rules break and survival of the fittest reigns supreme. Since their world is mostly dark, the Gnomes place great importance on sound when describing things. The known world to them is characterised by the familiar sound of machinery, the clanking of gears, the whistles of steam escaping from pneumatic tubes; all these are to the Gnomes integral elements of safety and order. The other part, they mostly associate with the deep tunnels and crevasses, untouched by civilization, extending, if the stories are to be believed, to the very roots of the world. Ûnisgræb is the word they use for that part of their world, a word which roughly translates in our language as “The Howling Deep”.
I recently got my taste of the Ûnisgræb, when I was invited by Mardron Goldsparkle, Potholer-General of Gnometrion’s military forces, to follow the fabled twenty-third scouting platoon in one of their missions. A privately-owned mining ship had gone missing, so a search party was organised to descend into the tunnels.
I was offered one of the scouts’ riding Olms, large, mostly blind amphibians with pale, pinkish skin, perfectly adapted for life underground, which some of the Gnomes train and use as mounts. I respectfully declined their offer, since these creatures raised an uneasy feeling in me and resorted to the back seat of the mechanical golem transporting the platoon’s leader. We traversed the tunnels of the outskirts of Gnometrion for what amounts to three surface world days until we found a shaft, the likes of which such ships leave behind them as tracks. From there on we moved slowly, since those tunnels are always on the verge of collapsing, using the golem’s powerful arms to install wooden supports before the rest of the platoon could pass in relative safety.
On the fifth day, it was the first time we encountered anything other than dirt and rock. The Olms sensed it first, their sensitivity to tremors letting them know someone was approaching. Noticing the disquiet of their mounts, the soldiers raised their lanterns and torches to shed light further down the tunnel; only to reveal a lone Gnome, exhausted, dirty, and desperately lost in the darkness...

Purchase The Howling Deep eBook to read the full story!

Lack of reviews for this product. Be the first to write a review.

2 £
pcs Add to cart
Other products in category

The Black Catacomb Part II: The Man in the Pit (eBook)